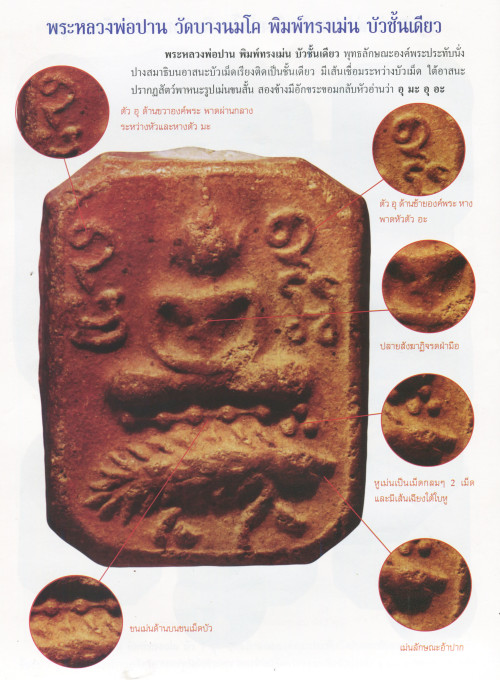 Pra Putta Jao Pratap Sadtw – Pim Khee Men (Porcupine) – Luang Por Parn – Wat Bang Nom Kho (Amper Sena, Ayuttaya)
The Porcupine riding Buddha amulet of Luang Por Parn, was released in six different Pim (at least those which are accepted as Pra Niyom preferred category amulets).They are found in various coloured clays ranging from beige, brown, yellowish-white, reddish brown and terracotta red, as well as dark gray/blackish color.
The six different Pim are recognizable through their individual characteristics, the one in this image being the ‘Thaan Bua Chan Diaw’, which means ‘single tier Lotus Dais’
There are some other single tiered Dais Porcupine models (all Pim Niyom preferred), but which do not have the petals of the lotus, rather, have single thin curved lines or straight line Dais.

The Bua Chan Diaw Pim is recognisable for the round ball-like petals with a straight line connecting them under the seated Buddha image. Its marks of authenticity, apart from knowing how to recognise the ingredients of the Sacred Powders and Muan Sarn in the amulet, and the signs of aging, are various;
1. The Porcupine has a gaping mouth rather like a shark
2.the ears of the porcupine are floating above the head as two bulges
3. The spines of the mane of the porcupine connect with the base of the Lotus Dais in the centre.
4. The Sangkati Civara Robe Jacket flows down to connect with the palms of the hands of the meditating Buddha
5. The “U” Khom Agkhara Lettering above the Buddha’s left shoulder, flows down to connect with the top of the Khom Agkhara Letter “A”
6. The “U” Khom Agkhara Lettering above the the Buddha’s right shoulder, flows down to float between the two upper tails of the Khom Agkhara letter “Ma”, without touching it.
Please click the image to view in full size High-Res for closer scrutiny