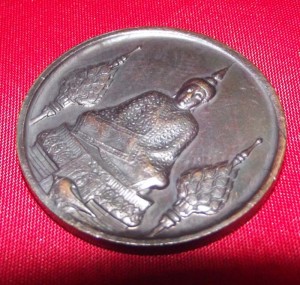 A Classic Famous Edition Coin Amulet of the Emerald Buddha (Pra Gaew Morakot), in the Winter Robes. The couns were made in three different seasonal dresses, which is a Tradition held in the Temple of the Emerald Buddha, to change the robes adroning the Buddha as each season passes, Rainy, Hot and Cold Seasons. More than a Hundred Master Guru Monks of the Era attended the massive and Official State Ceremony of Putta Pisek Blessing, to perform their Incantations and Empowerments. The coin was included in the ‘Pra Racha Piti Sompote Krung Ratanakosin 200 Pi’ (Royal Ceremony to Celebrate 200 Years of Ratanakosin Era). The Ceremony was held on the 6th April 2525 BE, with Royal Permission to celebrate, which was requested by Prime Minister Brem Tinsulanon at the palace, and accepted. The celebration at Wat Pra Sri Ratana Sasadaram was only one of various celebrations held in different momumental locations of Bangkok. Above; Official Emblem of the 200th Anniversary Celebrations

The Temple of the Emerald Buddha was one of the various locations included in the anniversary celebrations due to the fact that it is an important temple of the Ratanakosin Era, and also to celebrate the completion of a five year refurbishment program, begun in 2520 BE by Somdej Pra Tep Ratana Rachasuda Siam Boroma Racha Kumaree, which was finished in 2525 BE at the same time as the Anniversary celebration. The Celebration was marked by the ‘Yok Chor Fa’ ceremony (raising of the new Temple Roof Struts). The previous day alms were given to the Sangha as a preliminary on the 5th April, and then on the 6th April 2525 the Brahman Kroo Masters and performers of the Ministry of Classical Arts performed a reading of the Poem Sud Dee Pra Put Maha Mani Ratana Patimakorn accomanied by the three stringed ‘Sor’ Thai Classic Instrument, with Bai Sri offerings and a ‘Wian Tian’ (walk around the Uposadha Shrine room three times holding a candle).

A large Puttapisek Ceremony to empower the amulets was made with over one hundred of the Era’s most powerful and accomplished Master Monks present.