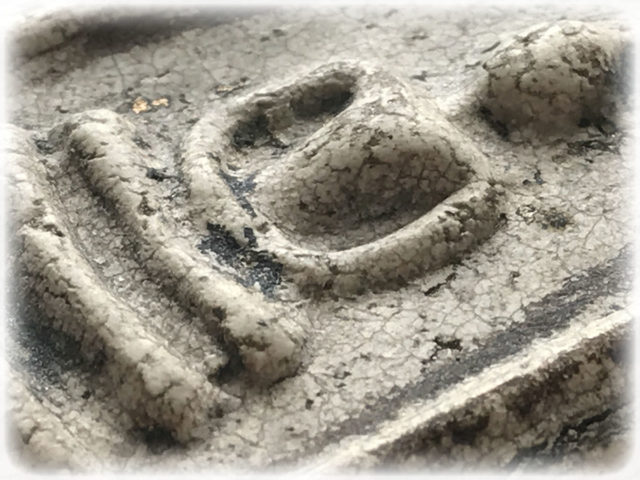 The Pra Somdej Wat Rakang Kositaram Kru Wat Sadter Amulet Burial Hiding Place Find is one of the essential studies of the avid student of the Great Somdej Dto and his Amulets, and a core element of the Dtamra Pra Somdej which all true devotees of Somdej Dto, and serious students and collectors of Ancient Amulets should have studied and have in their repository of memorised information. The Pra Somdej Wat Rakang Kositaram Kru Wat Sadter amulets were found buried in the Putta Sayaas (Sayasana Reclining Buddha) statue, at Wat Sadter in Ayuttaya, and in the Chedi Stupa, which is recorded as having been built in the year 2414 BE, one year before the passing of Somdej Pra Puttajarn (Dto) Prohmrangsri (Wat Rakang Kositaram). The amulets were made in remembrance of Somdej Dto’s Parents, as was the Sayasana Buddha statue and Chedi Stupa of Wat Sadter. The Putta Sayaas reclining Buddha statue was built on the grounds of Wat Sadter from Bricks and Mortar with Cement sculpture in the form of a Buddha lying down on his side, with his head on his palm. The statue measures 52 Meters Long and 9 Meters Wide, with its highest point being 16 Meters High. The Buddha statue is hollow, and it was in the hollow chamber of the statue where the amulets were hidden.

The Pra Somdej Wat Sadter amulets were discovered in 2499 BE, when the Prime Minister came to pray to the statue at the temple, and saw that it was in disrepair, and so he called the Ministry of the Municipality Government Office and told them to organise for the repair work on the Pra Non Sayasana Buddha statue. And so, as the restoration works began, and the interior of the statue was opened, a variety of different Pim (models) of Pra Somdej amulets were discovered to be hidden within. because in that time, the Pra Somdej Wat Rakang Kositaram of Somdej Pra Puttajarn (Dto) Prohmrangsri was not yet a world famous and priceless amulet, nobody paid overly much attention to the find as much as we do in the present day, and so the news of the find was not widely publicised around the country at all, and (thankfully), the batch slipped past the eyes of the speculators and the ‘Sian Pra Niyom’ Amulet Scene Leading Auctioneers, who monopolise such amulets by buying them all up, waiting for them to become inpossible to find, and then slowly release them at millionaire prices. And so the amulets were randomly shared and distributed between important committee members who helped with the restorations, and the amulets were not known about by the general public. The amulets remained in the possession of a small group of people right up to the present day, until some years ago when students and historians, devotees and amulet aficionados managed to stitch the missing links together, and bring the necessary evidence to light. Then the owners of those amulets distributed came out iof the shadows, and the amulets came into visibility of the general public in Magazines and News articles. In the year 2549 BE The Chedi Stupa of Wat Sadter temple was restored again, and Amulets were removed and released into Public Distribution, and again in the year 2552 BE, during the second restoration of the Sayasana Buddha, when the Committee decided to reopen the Kru Chamber within the Buddha statue again and remove more of the amulets for public distribution to raise funds, and allow the devotees to obtain such a sacred amulet of Master Class Status. The Pra Somdej Amulets of the Kru Wat Sadter Hiding Place Find, were hidden in the Kru immersed below the water level for a very long time, which caused the original ‘Rak’ lacquer which covered many of them to wear out and detach from the surface of the amulets. This resulted in this series of Sacred Pra Somdej possessing their own inimitable appearance, which differs from the Pra Somdej Wat Rakang Kositaram, due to the long time period spent under different atmospheric conditions, with high moisture and humidity. The result is a very eye catching and Sacred appearance which has only served to increase the depth of study content when examining the various features and aspects of the Muan Sarn Sacred Powders (ageing, contraction, ingredients, hardness, density, surface texture) The Pra Somdej Wat Rakang Kositaram of Somdej Pra Puttajarn (Dto) Prohmrangsri which were kept at, and released through Wat Rakang, were never placed in Kru Burial, and hence maintained a clean surface appearance. But the Pra Somdej which Somdej Pra Puttajarn (Dto) Prohmrangsri took and buried in hiding chambers in temples around the country, were subjected to climatic changes, flooding, droughts and heatwaves. This is the reason for the fact that the red, black lacquers found on the surface of the amulets found at Wat Sadter, are flaked off from exposure to water. The remaining bits of lacquer which can be found visible in lesser or greater amounts on the Wat Sadter amulets is extremely dry and hermetically attached to the surface of the amulets, from well over a Century and a Half in burial. In the Wongarn Pra Niyom Amulet Aficionado circles, this is called ‘Nuea Rak Dtaay’ meaning ‘the lacquer has passed away’. This is used to refer to the effect of the laquer breaking off leaving stains in a crackled pattern, that lends a marbled effect to the surface of the amulets, and only serves to enrichen its character and eye- pleasing effect. Some exhibits remain with highly evident lacquer traces, whereas others have been cleaned at some point (some devotees would clean the amulets, others would leave them in their natural state, according to personal preference). On those exhibits whose surfaces have been cleaned of lacquer coating, the surfact of the clay has a marble-like crackled appearance, which the Amulet World calls ‘Nuea Dtaek Lai Nga’, which means ‘Broken Ivory Markings’. These natural markings lend a subtle beauty and individual look to each amulet, not two amulets looking exactly the same. Note; The word ‘Nga’ means two things; 1. Ivory and 2. Sesame. It is clear that the reference is to Ivory, for the similar markings found on the surface of the amulets. it would not make sense to use sesame as an allusion).