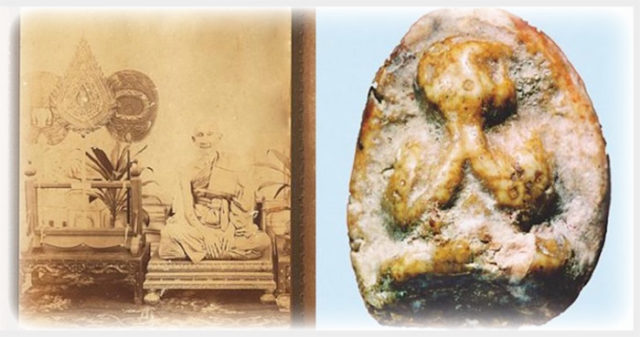 The Pra Pong Nam Man Kru Wat Ampawa Hiding Place Amulet series of Somdej Pra Putta Kosajarn, are a most classic, and extremely popular series of sacred amulets, for the fact that they are extremely sacred and high calibre amulets, but which carry a more affordable price than many other editions of the same age and calibre, and which are considered to be part of the study material of the true student of the Dtamra Pra Somdej, for the Muan Sarn contents of the Sacred clay. The Pra Kru Wat Ampawa is one of the oldest Kru Amulet finds in Bangkok, and which is highly respected for its immense Puttakun Auspicious Power. It is a very popular amulet with collectors, devotees of Buddhism and students of ancient amulets, for its affordability and high calibre regarding age and historical value.

The amulets are becoming much rarer these days, but in olden days were quite easy to find, as there were very many of them in the find. But as time passed their availability became ever less, and now they are only to be seen in the high end antique showrooms of fine Buddhist Miniature Arts of the amulet world. The temple of Wat Ampawa in what is now know as the Municipality of Ban Chang Lor, in Bangkok, has been standing since the days of the Ayuttaya Kingdom. It was in the Chedi Relic Stupa of Wat Ampawa, behind the Uposatha Shrineroom, in the year 2484 BE, that a hidden horde of Pra Nuea Pong Nam Man oily clay powder amulets were found. At this time, Thailand was at war, and its people in danger, so the abbot of the time, Pra Kroo Bpaen, broke open the Kru Chamber and distribute the amulets to the local folk, the soldiers and police around the country, to protect them.

The amulet hiding chamber (Kru), was first broken open to release amulets in the year 2484 BE, in the time when Bangkok was being bombed a lot, as the Japanese military were stationed in Bangkok Noi close to the temples of Wat Ampawa and Wat Arun. It is said that all of the people who wore a Pra Pong Nam Man Kru Wat Ampawa amulet survived the war.

The first opening of the chamber found both intact amulets and broken amulets within the Chedi. The broken amulets were used to pound into a powder and make new amulets, which were placed inside the Chedi Stupa Kru hiding chamber for release at a future time, and to replace the old ones of Somdej Pra Putta Kosajarn which had been removed. This batch was given a venerable Buddha Abhiseka Ceremony with a host of Great Masters of that Era, before hiding within the Kru. The Wat Ampawa Hiding Place amulets were created by Somdej Pra Putta Kosajarn with the intentions of distributing to devotees who helped with the restorations of the temple sometime around the year 2440 BE. The amulets were presided over in Buddha Abhiseka Blessing by Pra Putta Kosajarn Rit, of Wat Arun (Temple of the Dawn), who after the blessing ordered them all to be hidden within the Kru Chamber of the Chedi Stupa. Pra Putta Kosajarn was chosen to preside over the empowerment because of his great fame for powerful Puttakun Magic, and ability in empowering amulets.

Pra Putta Kosajarn Rit is hence considered the maker of the amulets, although they were blessed by a large number of the great monks of that era.

Pra Putta Kosajarn Luang Por Rit was born sometime around 2380 BE, and was taken by his parents to be educated at the age of 10 years old at Wat Nak Klang. At the age of 13, he ordained as a Samanera Novice Monk, and practiced at Wat Rat Burana. During his time as a novice he finished his third ‘Prayoke’ level in Dhamma and Pali Sanskrit studies. In the year 2400 BE, he ordained as a fully fledged Bhikkhu and rapidly advanced to Prayoke 5, and passed his Pali Translation Exams. After this he was awarded the stately title of Pra Amorn Moli, and was given the charge of running the temple of Wat Bopit Pimukh. In the year 2437 he was elevated to Pra Tamma Warodom. In the year 2441 BE, Luang Por Rit was given the elevated status of Somdej Pra Puttajarn, and was given charge of becoming the Abbot of Wat Arun (the Temple of the Dawn)