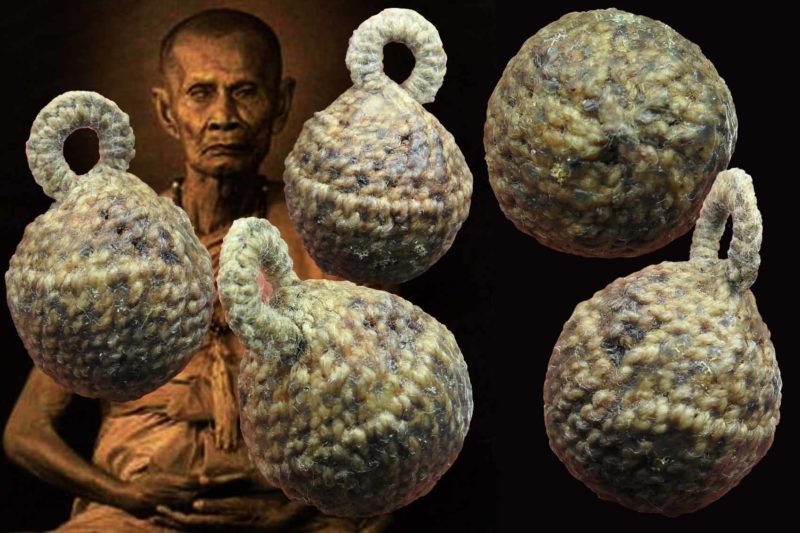 One of the more famous types of ‘Krueang Rang’ talismanic amulets of the Great Luang Por Tob (Wat Chon Daen), is the Look Om Chan Hmak Gesa, Sacred Areca-Betel Nut powder ball with Monks hairs, which was most commonly distributed with a cover wrapped in cord with a cord pendant hoop. Most would be wrapped with plain coloured cord, but some special ones were wrapped in tricoloured cords (red white and blue for the Thai Flag), which is known as ‘Trairong’, or ‘Tong Chart’ (meaning ‘National Flag’). The olden days folk of Pechaburn are said to have preferred the following three types of amulets of Luang Por Tob above all others; It is said that whoever manages to possess all three of these sacred items, is blessed with extremely powerful blessings and will experience immensely luck and good fortunes.

The Look Om Chan Hmak of Luang Por Tob has many legends of miraculous events with devotees who used the Look Om, such as the story of the great Gangster Suea Kam Mee, who was a feared gunman of Hlom Sak District, who was shot with M16 by the police, and the bullets did not pierce his skin or kill him.

When Suea Kam Mee became old and gray, eventually his Look Om Luang Por Tob fell off (the cord ring broke), and he stopped wearing it. Within a few days of not wearing the Look Om he was shot again by enemies, and killed. Suea kam Mee’s grandson one day decided to open the cord wrapping of Suea Kam Mee’s Look Om to see what was inside, and found it to be made of Chan Hmak Betel Areca Nut with Monks hairs mixed in, with a Takrut inserted within it. Luang Por Tob made Look Om over many years, so the Look Om of Luang Por Tob can be found from various eras. he made them in various ways with various appearances, such as bare powder balls rolled with the hand, others wrapped with cords, and even sometimes molded into the shape of Buddha amulets.

Luang Por Tob would mix his Chan Hmak chewed betel-areca with Nam Mont Holy Prayer Water, and add some monk hairs, and roll the paste up into a ball, and wrap it with various kinds of woven cords, depending on which kind of cords were available to him at the time. He would allow his devotees to help him to bind the Look Om with the cords, resulting in some people wrapping them left-handed, and others wrapping them right handed fashion. Some devotees would wrap a single weave, others double or triple weave, resulting in the Look Om of Luang Por Tob having a a large variation of appearances as far as the cord wrapping is concerned. But the actual Loom Om when finished had the rule that there had to be a pendant hoop attached, and fully enclosed with cord, with the weave having the appearance of a honeycomb pattern The See Pheung he would use would have to be previously empowered before using to coat the Look Om. A Ceremony was made for the See Pheung to be boiled with constant incantations. Luang Por Tob’s apprentices (Luang Por Tong, Pra Giang and Samanera Nid), would assist to collect the residues of the chewed betal-areca and roll them into Look Om, or even into the shape of Buddha amulets.
Luang Por Tob would only perform such a ceremony to make these amulets once every few years, because it was difficult to collect enough Muan Sarn to be able to perform the ceremony properly, and this took a long time to gather enough chewed betel-areca, and the ingredients for the See Pheung

When he would perform these ceremonies, some devotees would sit and wait for them to finish and ask for look om fresh from the ceremony (still not dry), and others would come later to ask for one after they were dried out. The Look Om were always amongst the most popular amulets with his devotees, because they were small and easy to carry/wear, and because of their undoubtable power.

The Looksit of Luang Por Tob value the Look Om Chan Hmak very highly, because they believe that when Luang Por used to chew the betel-areca nuts with his eyes closed in meditation, that he would enter the Jhanic states of absorption. It is considered to be a fact that true empowerment of amulets is performed by the attainment of arupa jhana (formless state of absorption), and so the Looksit believe that the Look Om of Luang Por Tob were properly and poerfully blessed using the correct and powerful method of empowerment

Whoever was able to visit Luang Por Tob and ask for some of his Chan Hmak chewed betel-areca is considered extremely lucky, because Luang Por Tob would only spit it out if asked, and would otherwise always swallow it all, making the Chan Hmak a rare thing to obtain. His Looksit would sit watching him meditate and wait to ask him for some Chan Hmak, in fear of blinking in case he swallowed it before they could ask.

If Luang Por Tob would chew betel in the night time, he would sometimes spit the betel-areca out onto the cliffside near his hut, and when the sediment had accumulated enough, he would ask his apprentices to collect it and gather for later to make amulets with. This was because the number of devotees who had begun to ask for Look Om had become ten times more than the amount he was able to make during the day, and was ever increasing, so Luang Por had to look for ways to increase the amount of Chan Hmak he was able to make for the devotees. The Look Om became famous over the years because of the large number of miraculous stories of devotees experiencing life saving miracles, with Klaew Klaad and Kong Grapan Chadtri protection involved.

Many people would travel to the temple from far afield to ask for Look Om Chan Hmak,and the number of devotees were ever increasing. So Luang Por decided to find a way to provide more to the people, and ordered his looksit to begin a new admixture that was easier to make larger quantity of, by mixing Betel-Areca with the Bai Plu leaf, the chewing cement (Poon Hmak), and mix with his Ya Chun rolling tobacco and other sacred ingredients, which were then mxed into a larg mound of sacred clay and given to Luang Por Tob on a tray to empower the sacred clay in solo.

The samaneras and other apprentice monks of Luang Por Tob would then take the tray of clay and mix it all together again in a large mortar bowl with the previous trays they had made for Luang Por to empower, and keep repeating the process until they had enough of the clay to make a complete edition with.

Then they took the final admixture and returned it to Luang Por Tob for a second empowerment to ensure the power of the Muan Sarn Clay to be as powerful as possible, They then molded the clay into balls and wrapped them with cord, to make them durable against the weather and wear and tear. Once the Look Om were all made, they were placed on a receptacle and returned once more to Luang Por Tob for a further empowerment session.

The Look Om which were not wrapped in cord were taken and dried out in the sun. The apprentices would take the still wet clay and lay them out to dry and wrap them in a piece of cloth and tie it up. This is why some of Luang Por Tob’s Look Om are found wrapped inside a piece of cloth, instead of woven cord.

Some apprentices would take a piece of rattan and place the Look Om inside it, and seal the rattan with some Krang Putsa paste, or some candle wax from sacred candles, or even tree sap. Ther apprentices would roll the Chan Hmak into a tiny ball and cover it in Krang Putsa resinous paste and apply flame to the Krang Putsa to seal it around the Look Om. After some time the Krang Putsa paste ran out, so the apprentices would use Khee Pheung Borisut pure forest beesnest beeswax, which was used for making See Pheung, and heat it to make it malleable, and cover the Look Om with it
They would wrap them in cords, and dip the cord wrapped Look Om in Melted beeswax to seal them up and prevent water or insects from being able to get inside. After this, they then began to distribute the Look Om to devotees, and the rest, is History.