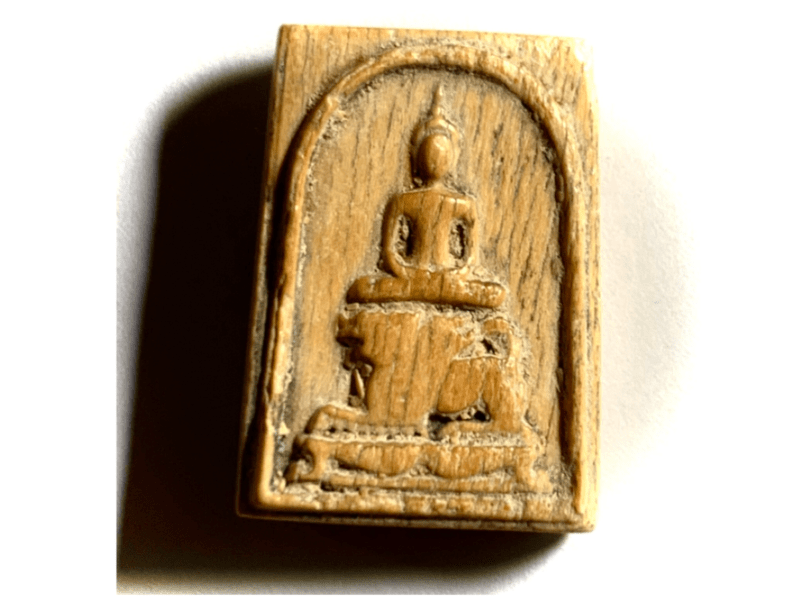 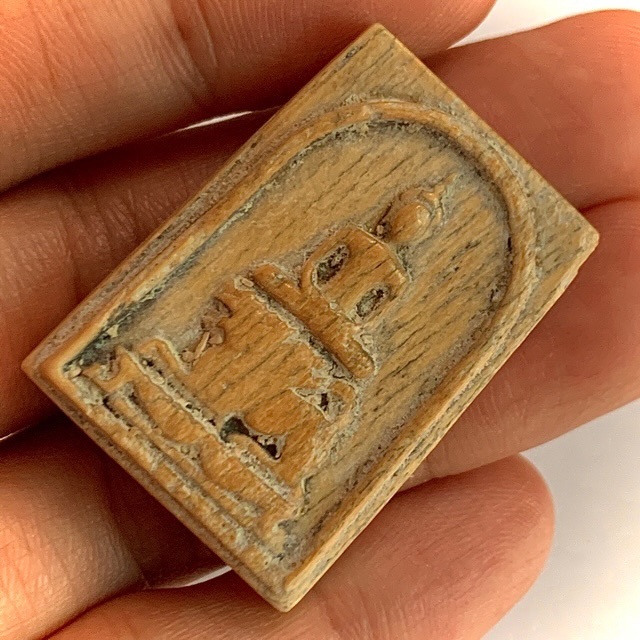 Ivory itself is believed by Thai Buddhist Folk to possess Kong Grapan Invincibility, and especially Maha Amnaj Commanding Power, for indeed the Great Elephant is the largest animal on land, and the most imposing animal to find in any jungle. Even the Tiger itself fears the Elephant. The lines which have formed from contraction of the ivory over time reveals the authenticity and true age of the ivory, and the amulet, which reaches the Era of Luang Por Derm’s Mid Era or even before, and is very ancient indeed.

The Rachasri Lion is representative of Maha Amnaj Commanding Power and Intimidating Aura. The Paya Rachasri Phone (also called Rachasri Bpon Hyuea) amulet endows the wearer with Protection and Commanding Power, Social and Professional Status, and Good Chances of Promotion through the Aura of Respectability and Personal Power. The Rachasri Lion appears in multiple myths and Legends dating back to the Vedic Times and before, and is seen as the King of the Himapant forest. 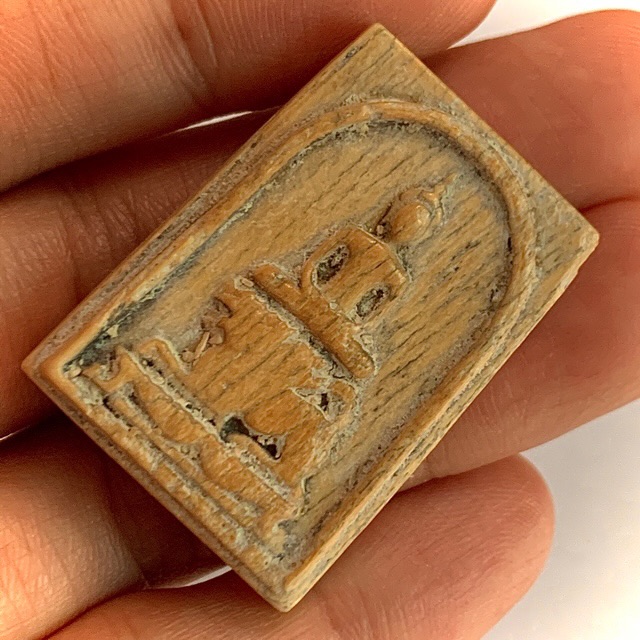 The Rachasri Lion has appeared in a multitude of Thai Buddhist and vedic Myths and Legends, including the Ramayana and the Thai Ramakien Epic. His great Metta as well as his Bravery is always revealed in the legends. The Singha and the Rachasri Himapant Lions are an Animist Deity from Vedic Lore that has been an integral part of Thai Buddhist People’s belief since the advent of Buddhism. 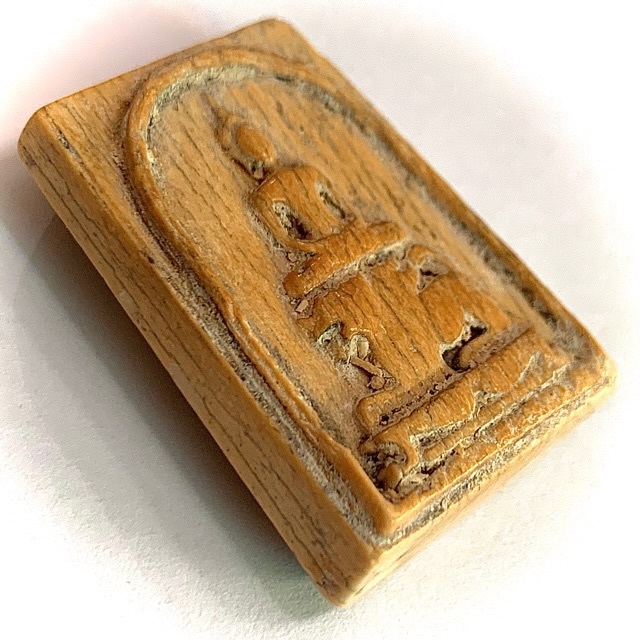 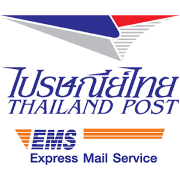 Free EMS Worldwide Registered Express Airmail Shipping is included with this amulet. This is an amulet that will not have been made in mass, and is carved from Ivory, and blessed by Luang Por Derm.

Luang Por Derm blessed and empowered a great many different kinds of carved wood and ivory, and tooth amulets, for example his world famous ‘Singh Sam Khwan’ carved Himapant Lion amulets. This Pra Somdej amulet is one of the rarer items to encounter, for it is carved with the Singh Sam Khwan HImapant Lion as the Steed of the Buddha, is in Very Fine Condition, and displays the true patina and beauty of ancient ivory in all its aspects, and is hence especially attractive for its power, and the fact it is in such beautiful condition, and carved with such fine artisanry. 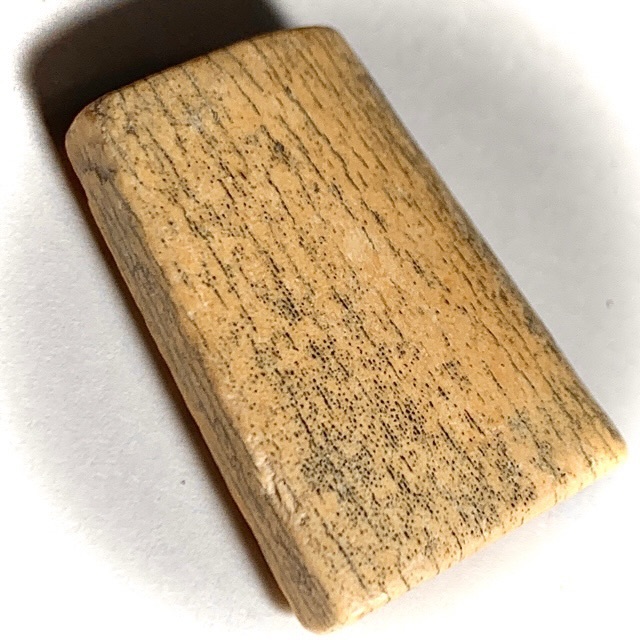 This exhibit is carved in the shape of the Pim Khee Rachasri Buddha, and is not only for protection power and status, through the Rachasri, but also of course, for Buddhanussati, remembrance of the Buddha, (to remind one of one’s practice (to keep the 5 precepts to allow the amulets power to emit), and empowered to bring Good Karma, increase status, lifesaving miracles, protective shield, powerful commanding aura, and high possibilities of promotion. 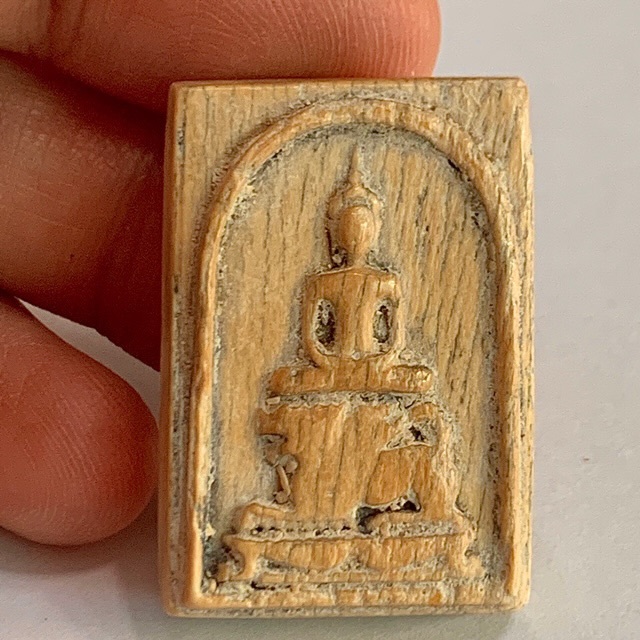 Luang Por Derm was Born on Wednesday 6 February 2403 BE and Died on Tuesday 22 June 2494 BE. He was one of the Greatest Masters of Thai Buddhist History, whose amulets, and famous ‘Mitmor’ ritual spirit knives are legendary around the whole wide world, for their authentic power, and Master Class Status. The Wicha of Luang Por Derm is continued to this day through his Looksit of the various Master Lineages, 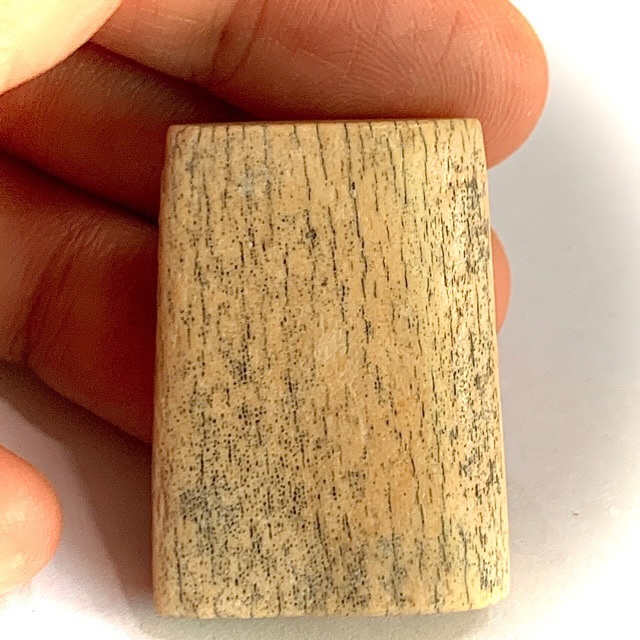 HIs carved ivory, and wooden amulets are rare items, for they were made by individual Artisans who were Initiated and had received the Wicha, and ‘Korb Kroo’ Ritual Empowerment as permission from Luang Por Derm himself. Only such Lineage Master Initiates were allowed to perform carving or knife forging for Luang Por Derm, and even to this day after his passing, all the Posthumous Editions of amulets which derive from Masters who are Initiates of Luang Por Derm, must use only amulets and Artisanry which has been made by an Initiated Artisan. 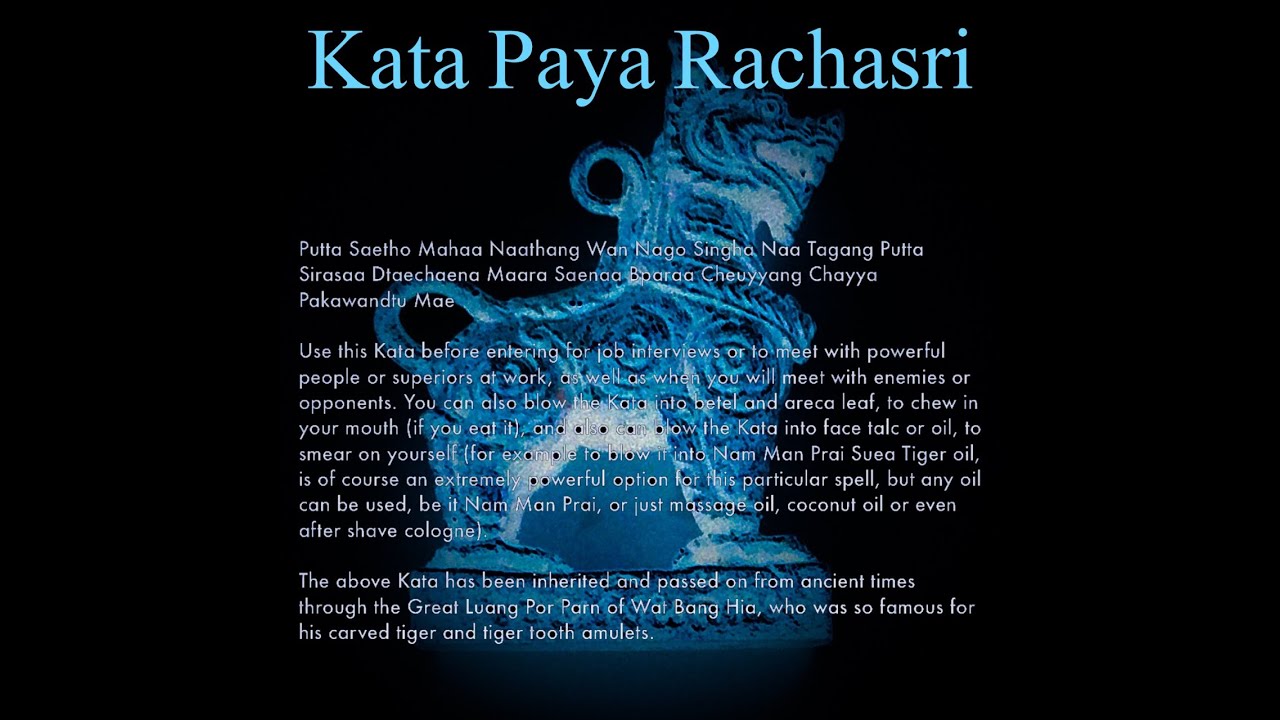 This great Master and Abbot of Wat Nong Po, is believed to have chosen to be born on Earth in the village of Nong Po, to lighten the sufferings of Buddhist People, and to bestow them with Blessings to lead them on their way towards Happiness, and Alleviate their Sufferings, and Poverty. Legend tells that Luang Por Derm is believed to have been born once before with the same parents in Nong Po Village, but he died at an early age. The mother and father were so sad, and at the burial, it is said that they took a ritual knife, and made some marks on the feet of the corpse of the child. 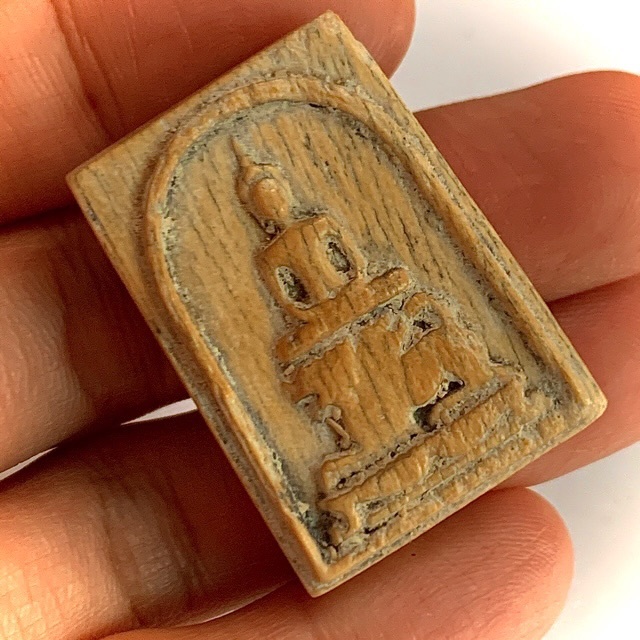 They prayed for the child to be reborn with them, and that if this miracle would truly happen, that the newborn return of the child, would be marked on the feet with these marks. It is said that when Luang Por Derm was born, that he had the very same lines marking his feet, exactly where his parents had made marks on the feet of their deceased son. It is hence believed that this was the first Miracle of Luang Por Derm.

Luang Por Derm did not study much at school during his childhood, but after he ordained into the Sangha as a Buddhist Monk, he gave intense efforts and great interest to learn Bariyatti Dhamma (Theoretical Dhamma) with Luang Por Chom the then Abbot of Wat Nong Po at that time. He never stopped practicing and studying the various aspects of Dhamma Practice, Vinaya, Wicha Akom (Sorcery) and Lekh Yant Agkhara Khom, which He studied with Nai Pan Choo Pan, who was an Adept Sorceror who was resident within the enclave of Wat Nong Po Temple. 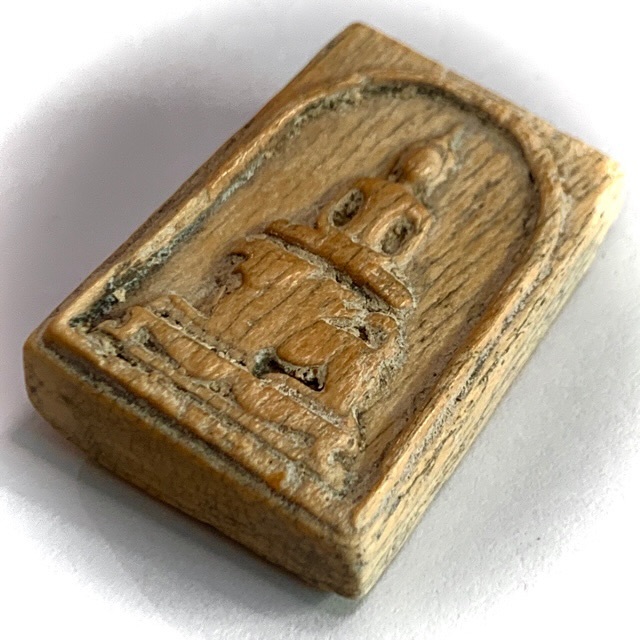 Nai Pan was a direct looksit of Luang Por Tao of Wat Nong Po who was an ancient Master Sorceror and Abbot of Wat Nong Po. He studied for seven years with this Master Sorceror, until his passing.. When his teacher Nai Pan passed away, Luang Por Derm then continued to practice and study Wicha with Luang Por Mee at Wat Bang Bon, another temple of the district in Nakorn Sawan, where he remained for a period of 2 Years. He also learned Tripitaka with Luang Por Num of Wat Khao Tong. 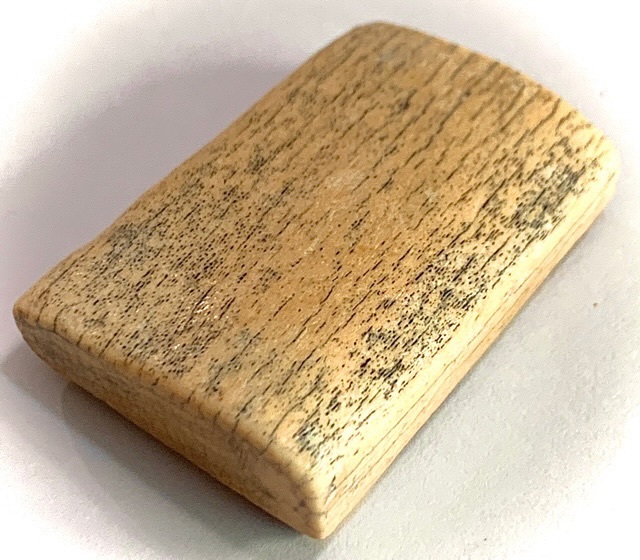 He also learned with Ajarn Yaem (a Lay Master who was Genius at both Dhamma Sermon Giving, and Wicha Akom). Luang Por Derm learned how to Preach Dharma, until he became an expert Preacher of Dhamma, and became recognized for his Immense Ability to interpret the difficult Dhamma Lessons and simplify them to explain to the Local Folk. Devotees would beseech him from all around the Province to come and Preach Dhamma to them. 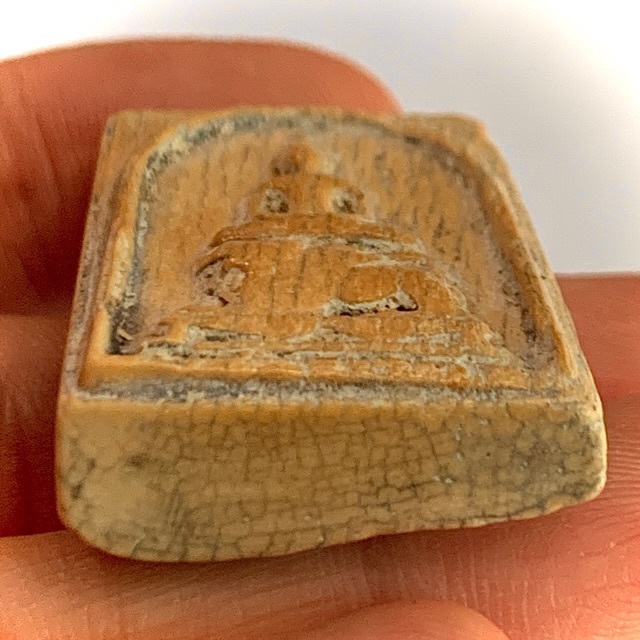 Luang Por spent many years performing Preachings. until one day he stopped, and said that every time he wold go to tell others how to practice, and they wold give donations, that he thought it would be better to stop, and focus on teaching himself. he would send his apprentices who had learned well from him in his stead, and retired from this practice sometime around his eleventh year of ordination. he then focused on developing Vipassana Kammathana methods of self transformation, and dedicated himself extrememly diligently to develop the causes of enlightenment (Arahantship). he became famous for his ability to sit erect for many many hours, beyond the ability of other Masters. 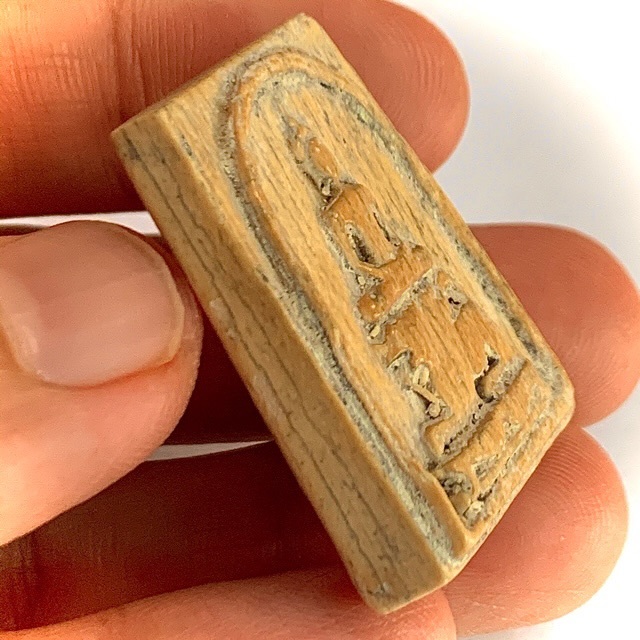 It was here, that Luang Por’s ability in Wicha Akom began to ascend to a very high level, and his magical abilities began to take form. and become extremely powerful. The fruits of his practice and studies which began with Nai Pan, and the many Kroo Ba Ajarn who had passed Wicha on to him flourished. 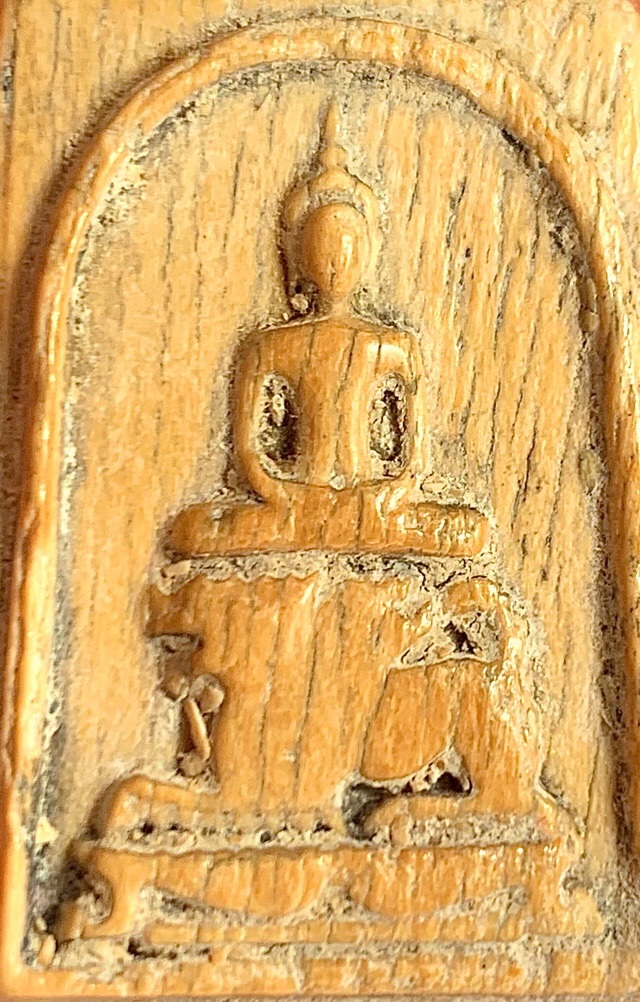 Luang Por still continued throughout this time to study with many other Masters, most of whose names are not known, for Luang Por Derm never really told others about his secret Masters, nor did he brag about the things he had learned, and the places he went too learื them. It is however known, that Luang Por did learn intensive Wicha Akom Saiyawaet with Luang Por Saban, and Luang Por Taes, of Wat Sap Tale, and Luang Por Wat Khao Nor 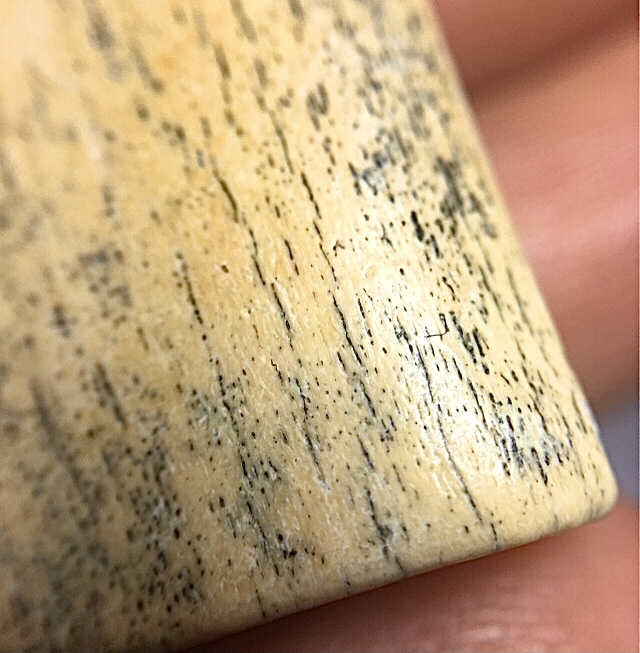 The amulets of Luang Por Derm are far and few between to be found, for indeed the many devotees of Luang Por derm, are never prone to part with their amulets, which are highly revered as Buddhanussati Remembrance of the Great Master, and considered irreplaceable for their Great Magical Power to Protect from Danger, Evade Hardships, and Nurture Success in LIfe’s Undertakings. 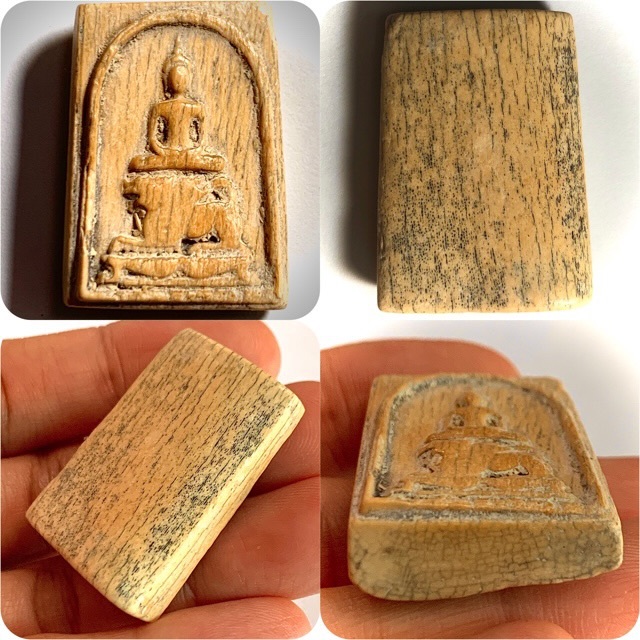