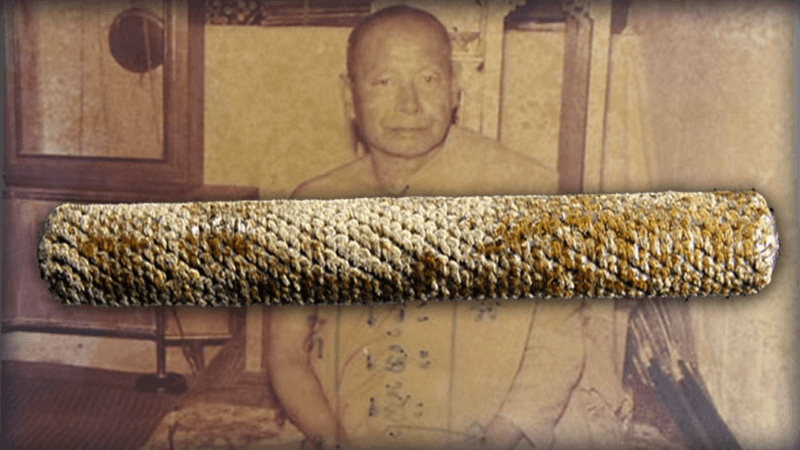 Presenting a highly recommendable and powerful amulet from one of the great Masters, as equally powerful as many much higher priced alternatives of other great Masters of the time. The Takrut Tone Mad Chueak Sacred cord-bound Yantra scroll spell of Luang Phu Nai (Wat Ban Jaeng) It is indeed amazing that some of the amulets, such as the Takrut Tone of Luang Phu Nai, are still so highly affordable, for their power, distinction and status increasing magic are accepted by devotees of the amulet scene for many decades. When compared to those of his peers, one could find oneself paying up to ten times the price for a powerful amulet of the calibre of the Takrut Tone Luang Phu Nai, who is seen as one of the most powerful Sak Yant Master Monks of his Era, and who was Kroo Ba Ajarn to many of todays most famous Ajarn Sak Yant. A Master whose Jing-Jok Talismanic Animist Gecko Charms are considered the number one Gecko amulet of all time by most aficionados, and one whose Wicha Sak Yant was, and remains to this day, Legendary for its Powerful Magick. Luang Phu Nai was a very famous Sak Yant Tattoo Master of Ayuttaya, whose Wicha Jing-Jok Gecko Magic was known to be the most powerful of any Sorceror-Monk of his Time. His Jing Jok amulets are the most nationally and internationally famous Gecko amulet of all the Pantheon of Thai Classic Pra Niyom in HIstory to Date, belonging to the ‘Krueang Rang’ (Talismans and Charms) Category of High End Masterpieces. Luang Phu Nai was a previous generation olden days master of Sak Yant Thai Temple Tattoos, and a master amulet maker, especially renowned for his carved sacred gecko charms, as well as many other Amulets. His life as a Buddhist Monk is highly documented, with many different authorships of his Biography and life’s works. His amulets are equally documented and highly prized with collectors of this Genre of Masterpiece Amulet.

The Jing Jok Luang Phu Nai can be found in almost every high class Amulet Magazine, and Encyclopedic Work of importance ever published. Apart from the famously powerful Gecko Charms from this Great Master Guru Monk, Luang Phu Nai has also great fame for his Takrut Tone and Takrut Maha Ud amulets, and his Pra Buddha Kotama (Pra Putta Kodom) and Pra Mokkhallā (Maugdalyana Arahant) amulets (both models in small and large versions) and his Metallic Monk Coin amulets.

All enjoy a highly revered and top rankiing position in the Amulet Appreciation Societies. His Sak Yant Thai Temple Tattoos were and still are legendary, for their authentic Maha Ud, Kong Grapan Chadtri, and Klaew Klaad power.