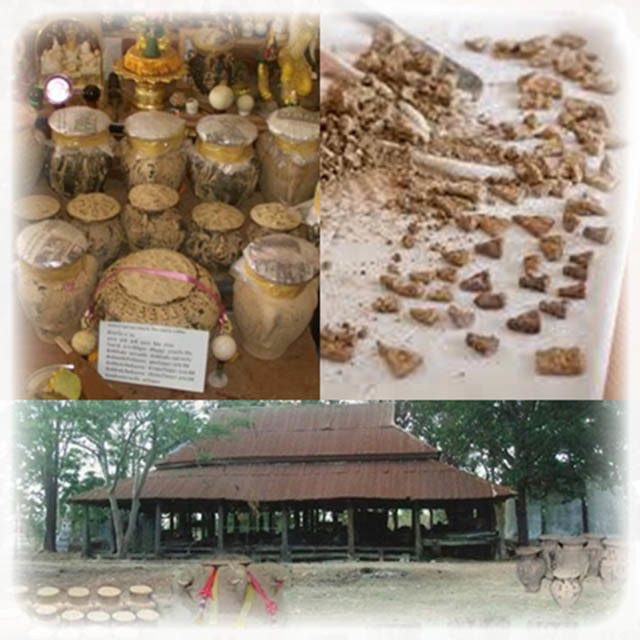 Presenting you with knowledge about Ancient Amulets with the 2553 BE discovery of Pra Luang Por Ngern Hiding Place amulets in a Find from the Temple of Wat Khao Pra Dtai. The edition is officially accepted, and assumed to have been placed under the pillars of the Sala Mai Gao temple salon in 2462 BE. Luang Por Ngern is one of Thailand’s Top ten Most Revered Buddha-Monk Images, for whom the Blessings of Riches and Protection are the most Highly Reputed for their Miraculous Power. 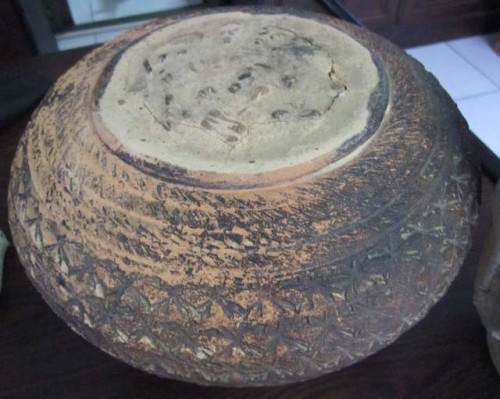 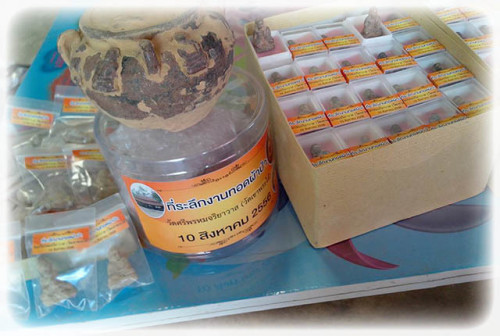 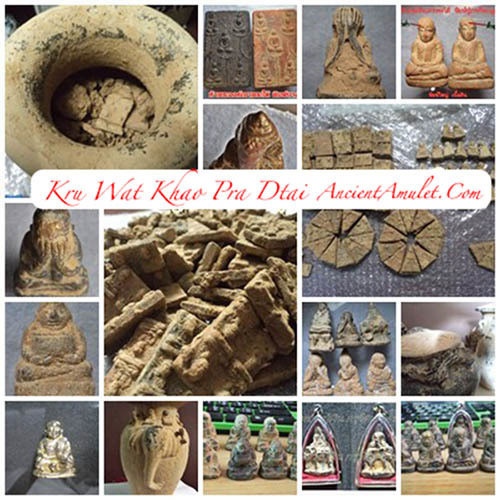 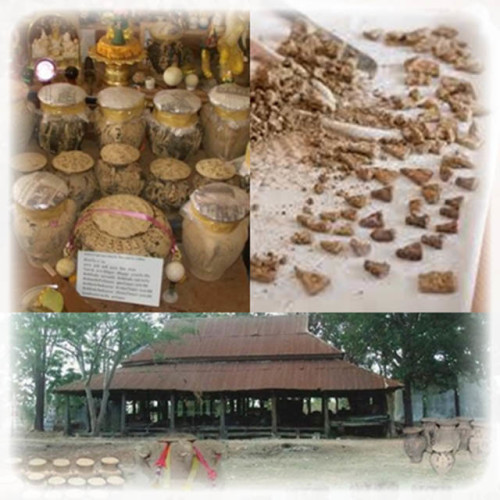 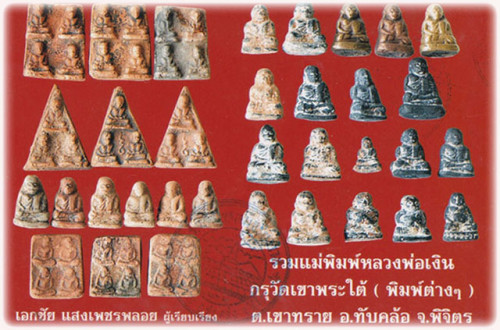 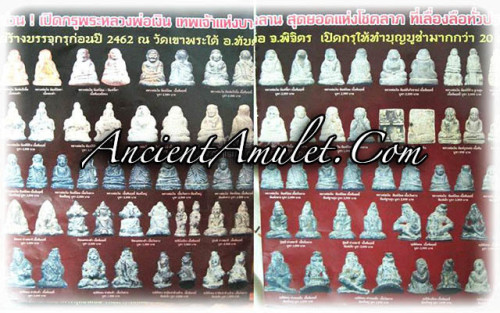 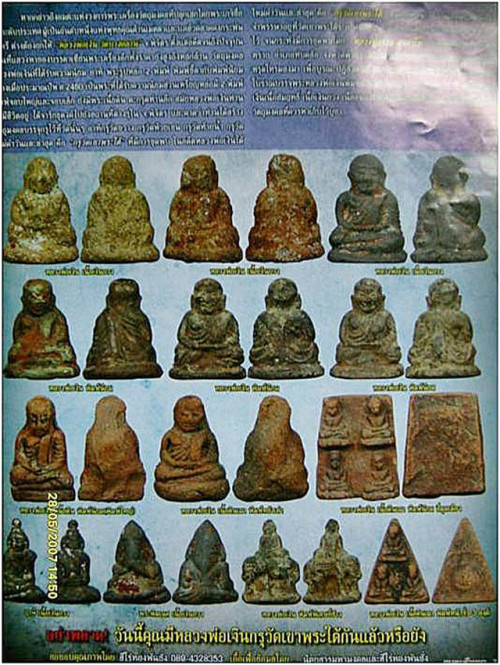 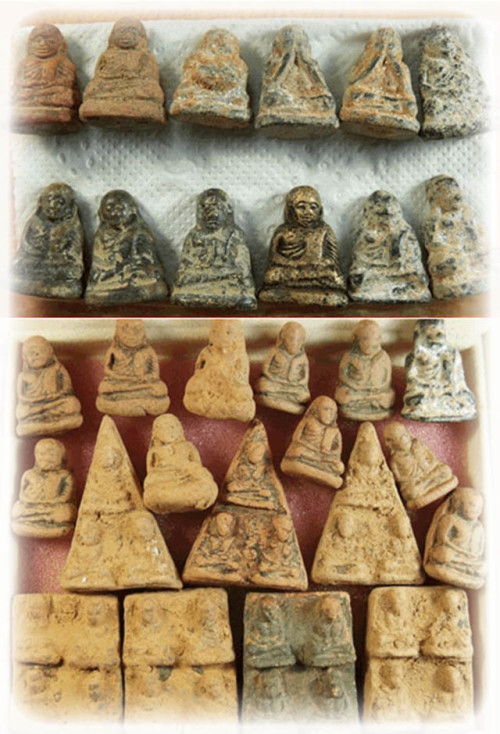 25 different Pim of amulets, were found buried in ‘Hai’ ancient clay pots, in the 2533 BE discovery dig at the temple of Wat Khao Pra Dtai.

They are assumed and officially accepted by the temple and the collector scene as having been buried and hidden there in the year 2462 BE, as LP Ngern was at the temple to inaugurate the Sala Mai, and due to the fact that a few examples of amulets in the pots had the date 2460 stamped on the base of the amulets.

The amulets were mostly quite badly damaged, with only about a third of them being made from cast metal, and the remaining two thirds being made from sacred powder and clay. Hence, only a limited number of these amulets were able to be restored. There were a number of different types metal substances in the amulets found, including Sacred Alloys based in Gold, Silver, Bronze, Copper, Iron, and Lead. The versions found made in ‘Nuea Loha’, are highly preferred.

A very few of them were found in some examples to be ‘Piak Tong’ (wet gold effect), which instantly became ‘Niyom’ (preferred) amulets and the price of them rose much higher than other models. This golden coating method was a method used applying a specific method used in the early Ratanakosin Era of the Ayuttaya Kingdom. It is not used anymore in its particular method.

Some of the amulets were kept with the ‘Kraap Kru’ earth and mildew growths on the surface of the amulets. Others were cleaned to reveal their design features and the metallic sheen, leaving just enough Kraap Kru to enhance their beauty, and reveal their origin. The amulets were discovered as the ‘Sala Mai Gao’ wooden shelter salon was removed to build a new one, and some pots were uncovered under the pillars of the Sala Building, as well as hidden underneath the Main Buddha Image within the Building.

We have sourced a few of these rare amulets, and are adding them to the storefront showroom as fast as time permits. We have spent a long time studying and researching to authenticate and deliver proper reference information about the amulets, which we highly recommend as an ultra affordable amulet for those who seek an alternative to the Pra Luang Por Ngern Pim Niyom Wat Bang Klan First edition Amulet, which are both no longer affordable, nor easily available to anybody except millionaires.

The temple of Wat Khao Pra Dtai has released an official book of this find and documents the edition and its 25 or so different Pim (models), and confirms in its historical records, that Luang Por Ngern himself came to install and bless the Sila Reuks Foundation Stone at the temple and built the Sala Mai Gao building, which explains well, how the Luang Por Ngern amulets got placed under the feet of each pillar, under the foundations of the building.

None of us were present back there in 2460+ BE to witness the events, and so, as always, it is a matter of personal faith as to what oneself concludes as to the origins of an ancient amulet of esteem, but with all the information gathered, and the reputability of the sources of the information (The Temple Itself), makes this recent discovery of what are almost certainly original Luang Por Ngern Wat Bang Klan Amulets from the Hand of the Master Himself, and are Master Class Amulets that are for now, the best alternative to the first edition Pra Luang Por Ngern Roop Lor and Rian Job amulets of World Famous Status, and Millionaire Price-Tags.

This find has become a Classic and Highly revered Edition as it falls ever more into the eye of the General Public. Its rise in popularity is now incremental to the rapid speed with which news of its existence is spreading like wildfire, due to the modern age of social networking, and devotees of LP Ngern are sharing their experiences and knowledge on the internet, which has in turn caused this edition to explode in the speed of its rise to popularity and obtain its Master-Class Status.