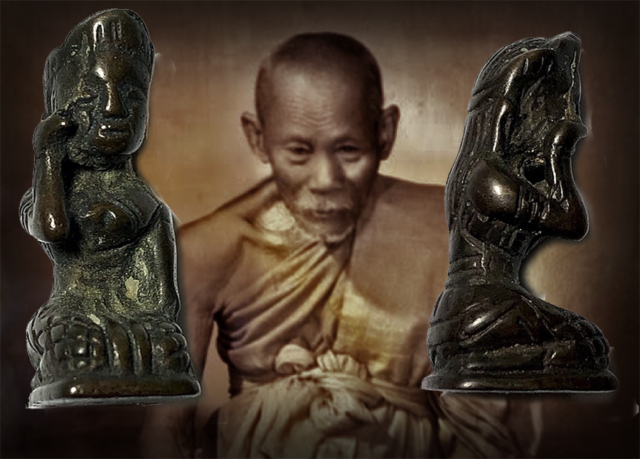 The Nang Kwak amulet of Luang Por Jong, is an immensely rare acquisition for the true Devotee of Luang Por Jong, and an irresistible exhibit for any truly avid collector of this Master, and for those who seek the perfect amulet to increase their business earnings and customers, and improve their charm, business and social skills. 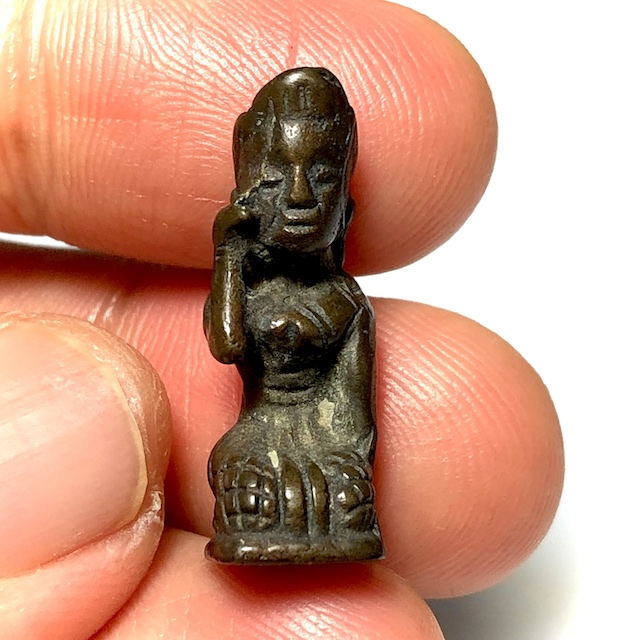 Luang Por Jong made amulets between the years 2483, to 2507 BE, after which Luang Por passed away in the year 2508 BE. Luang Por Jong, was one of the previous generation of attained Masters, of National and International Fame. The Mae Nang Kwak amulets of lp Jong are considered amongst the top 5 Mae nang kwak amulets of all Masters, along with Luang Phu Bun (Wat Klang Bang Gaew), Kroo ba Chum (Wat Wang Mui), Luang Por Te (Wat Sam Ngam), and Luang Por Im (Wat Hua Khao)

Known for his Kong Grapan Chadtri Klaew Klaad protective amulets handed out to soldiers during the Indochina Wars. His Pla Tapian Maha Lap Kaa Khaay amulets are also renowned for their ability to instigate good commerce and prolific sales quotas with sales persons. 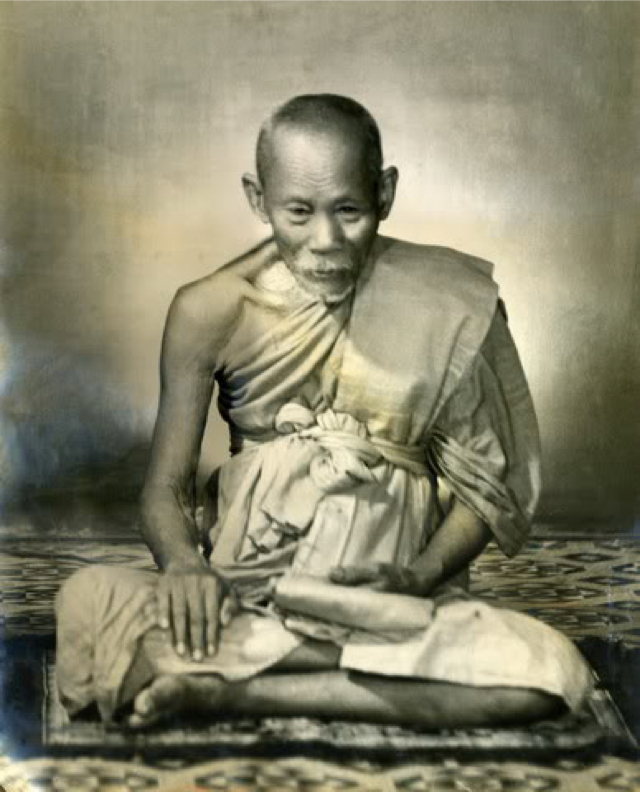 Luang Por Jong was one of the Great Guru Masters of the Ayuttaya Province, whose powers of Kong Grapan Chadtri, Klaew Klaad, and Maha Amnaj Serm Yos Magic was highly favored with high ranking officers and successful leaders of Adminstrative Professions. He was famous for many different amulets, and released many, including the Takrut Hnaa Phaag Suea (Tiger Forehead Skin Yantra Scroll), the Pla Tapian Koo, and his Many Sacred Powder Amulets, such as this Pra Somdej Bailan from the Indo-China War Era. 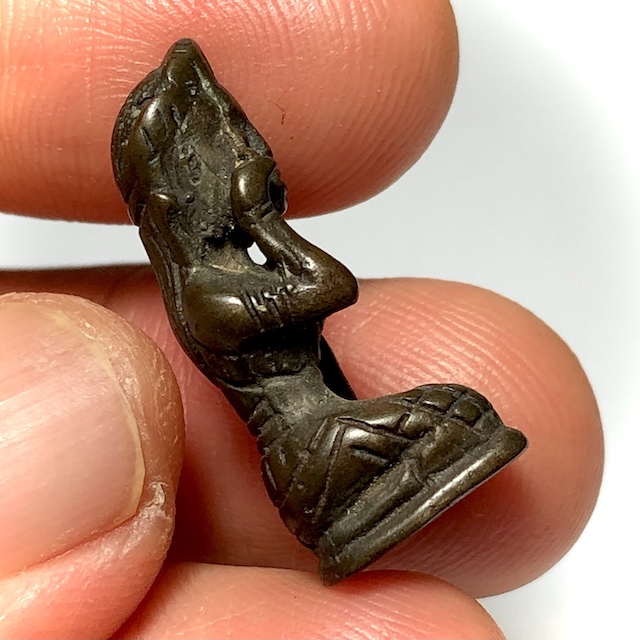 His Guru Monk Coin amulets are highly sought after and revered, and have a well documented ‘Dtamra’ (Catalogue of the Pantheon), allowing for collectors to easily authenticate and research the origins of these amulets. His Magic Ring Amulets, Pra Somdej and other Sacred Powder Votive Tablets, and Powerful Takrut are famous as they are rare to find. Luang Por Jong’s Pla Tapian Maha Pokasap Lap Kaa Khaay Gold-Silver Fish amulets, are also renowned worldwide, for their ability to instigate good commerce and prolific sales quotas with sales persons. 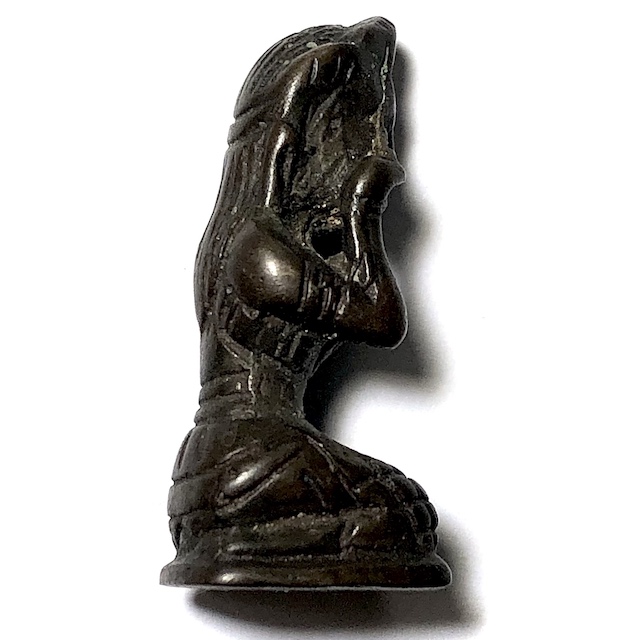 The Legend of the Ghost Soldiers

Thailand sent nearly 40,000 volunteer soldiers to South Vietnam to serve alongside the Free World Forces in the conflict, but unlike the other foreign participants, the Thais came armed with historical and cultural knowledge of the region. Blending the methodologies of cultural and military history, as well as their mysterious Buddha-Magic, as was seen by the foreign soldiers who saw the Thai Military wearing amulets, who were shot down, and who stood up again unscratched, and continued fighting as if they were bulletproof. This caused the alliedf forces to give the Thai Soldiers the name ‘Taharn Phii’ meaning ‘Ghost Soldiers’. This legend became well known and talked about with the western allies, amny of whome beseeched their Thai allies to bring them to a master monk for protective amulets for themselves. 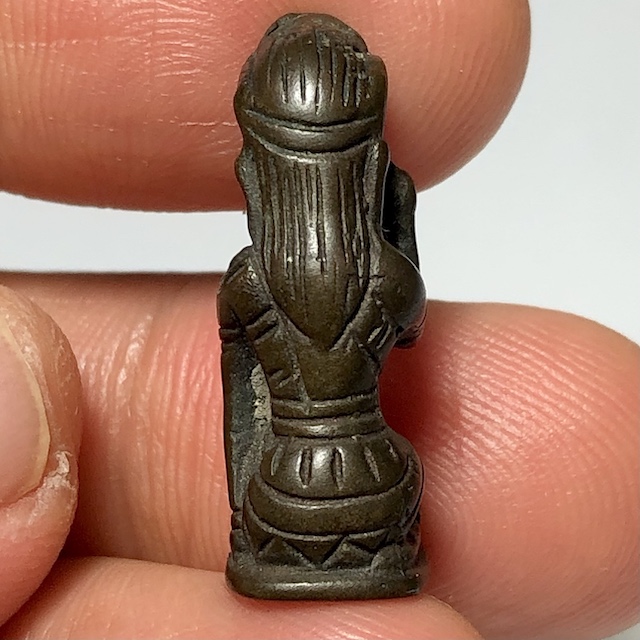 Luang Por Jong is counted along with the other Great Masters Luang Por Jong (Wat Bang Grabao), Luang Por Chaeng (Wat Bang Pang), Luang Por Opasi (Asrom Bang Mot), Luang Por Kong and Ajarn Chum Chai Kiree, as well as the temple of Wat Sutat, to have provided the most powerful miraculous amulets to the Thai Military to protect them from danger and death during battle. The Thai volunteers in their wartime encounters with American allies, were often seen to be hit by bullets, and stand up again unhurt, which caused the Thai soldiers to earn the nickname ‘Taharn Phii’, meaning ‘Ghost Soldiers’. 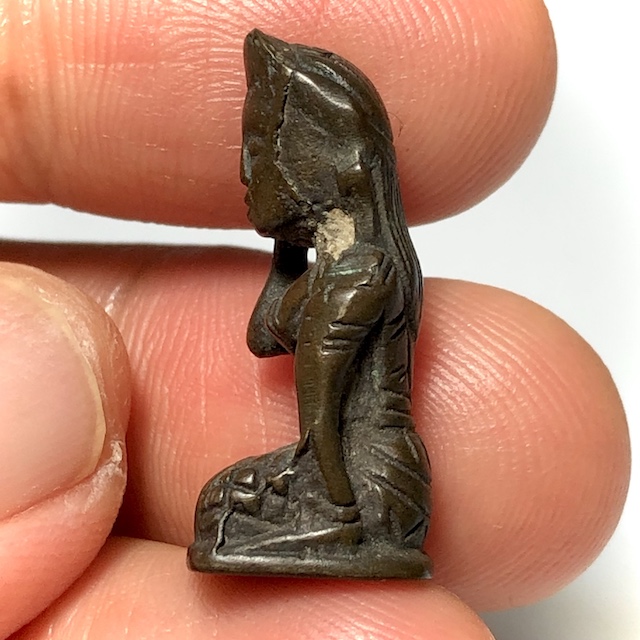 Luang Por Jong was born with the name ‘Jong’ into a farmer family in the village of Na Mai, in Bang Sai Municipality, of the Province of Ayuttaya. HIs Father was called my Yord, and his Mother was called Mrs. Khlip. Luang Por Jong had two younger siblings (one brother and one sister). His younger brother was called Nil, and his little sister was called Bplik, who was the youngest of the three. It is not known exactly which date Luang Por Jong was born, for there is no official documentation of his birth. But it is stated in his family lineage, that he was born during the time that King Rama 5 was ruling Siam, on a Thursday of the year of the monkey on the 8th Lunar Phase. This, when calculated from knowing the Year of Monkey during the Reign of King Rama 5, within Luang Por Jongs childhood, would mean he would have been born on the 6th of March 2415 BE. During his childhood he displayed strong leanings to remain in solitary, and even when his parents would take him to the local Lige theatre shows, he would distance himself from the crowd of spectators and watch from a distance. He was never one to socialise or look for attention. Luang Por Jong was ordained in 2435 BE at Wat Na Tang Nork temple in Ayuttaya, and was given the ordained name of Jong Puttassaro with the Abbot of Wat Na Tang Nork as his Pra Anusawanajarn (Luang Por Po). Luang Por Po noticed that Luang Por Jong, despite being weak of body and prone to illness, was excellent in his mental capacity and learned the Khom Agkhara Sanskrit perfectly in a very short time. It became noticed by the local devotess and by Ajarn Po himself that Luang Por Jong was showing wisdom and ability in Wicha Akom Sorcery that was far beyond his age. 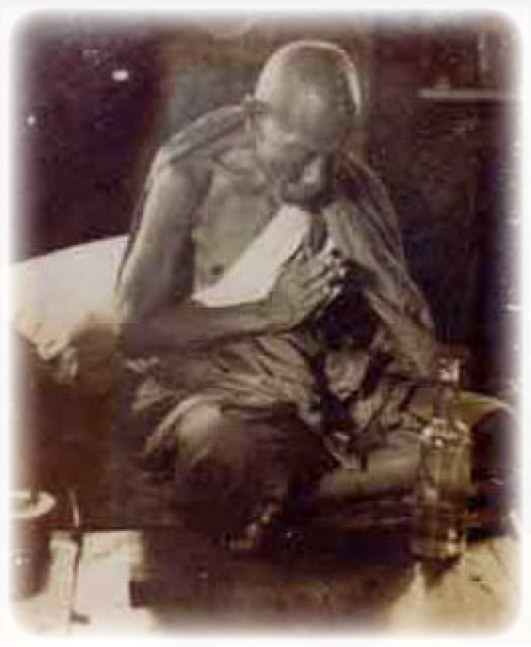 In no time at all, Luang Por Jong was given every single facet of the Wicha from his Kroo Ba Ajarn Luang Por Po, and became a Master Sorceror in his own right, and a great Dhamma Practitioner and Teacher to the local Folk. His trajectory followed on from that, and he never stopped advancing, becoming one of the Greatest Sorceror Monks of his Era, until his passing in the year 2508 BE. Luang Por Jong remains one of the most famous Masters of Indochina Wartime Era for his Powerful Kong Grapan Chadtri, Klaew Klaad, Maha Lap, Kaa Khaay and Metta Maha Niyom Magic.

Nang Kwak is the daughter of ‘Phu Jao Khao Khiaw’ (meaning ‘Grandfather Lord of the Green Mountain – Khao Khiaw could also mean ‘Green Horns’). Phu Jao Khao Khiaw was a Lord of the Jadtu Mahaa Raachiga realm (one of the lower levels of Heaven – an Asura realm of giants and monster beings). His other name is ‘Pra Panasabodee’, and he is the Lord of the forest and places where wild plants grow. In that time, there was an Asura demon called Taw Gog Khanag (otherwise known as ‘Taw Anurach’). Taw Gog Khanag was a good friend of Phu Jao Khao Khiaw, who had been attacked by ‘Pra Ram’ (the name of Rama in the Thai Ramakian – adapted from the Indian Ramayana Epic), who had thrown a Gog tree at him which pierced his chest and carried him through space to be pinned to the side of ‘Pra Sumen’ (Mount Meru). In addition, Pra Ram cursed him with the following magic spell; ‘Until your descendants weave a Civara monks robe from lotus petals, and offer it to Pra Sri Ariya Maedtrai (Maitreya – the future Buddha), your curse will not be lifted’. 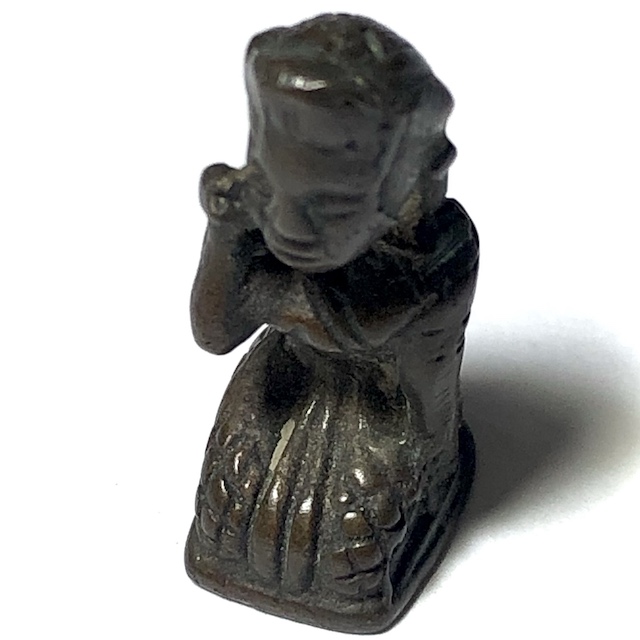 After this, Nang Prajant, the daughter of Lord Gog Khanag (Taw Anurach) had to serve her father, spending the days and nights trying to weave a Civara robe from lotus petals, in order to have it ready for offering to Pra Sri Ariya Maedtrai, who will descend to become enlightened in a future age from now.

Because Lord Gog Khanag had to remain cursed and pinned to Pra Sumen, his daughter was in a pretty dire state without her father to help run things.
Because she had to spend all her time weaving the Civara, she had no time to go sell things or make money, nor time to run a shop. When Jao Khao Khiaw heard the news of this, he felt compassion, and sent his daughter Nang Kwak to go stay with her as a companion. Because of the ‘Bunyarit’ (power of her great merit), Nang Kwak caused merchants and rich nobles from around the area to flock to Nang Prajants home and bestow gifts of gold, silver and money on them. Nang Prajant became wealthy and led a comfortable life. 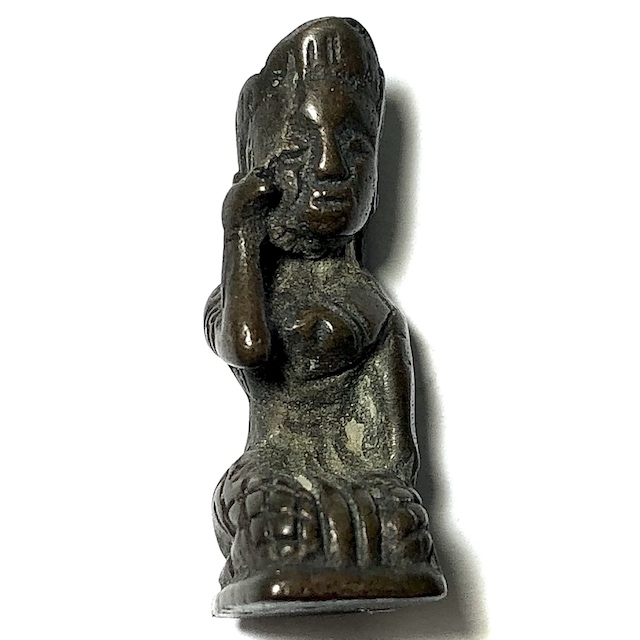 Nang Kwak statues are a very sacred and ancient tradition of Deva worship which Thai Buddhists adopted from Brahmins as they immigrated and came to stay in Siam, long before Buddhism had got a foothold. Due to this, Ajarns of Ancient Times created ‘Kreuang Rang’ (magical effigies) in the likeness of a lady with a shoulder mantle, sitting and beckoning with her waving right hand, inviting you to come and buy her wares. The statues were dressed in the traditional costume, and the Masters would make offerings and chant in meditation, until the statues hand began to wave back and forth, which was the signal that the ritual was successful and complete. Nang Kwak is seen to be prayed to (Bucha), as an altar statue, and also as an amulet, and Pha Yant (Yantra Cloth), and sometimes as powder amulets, and lockets.