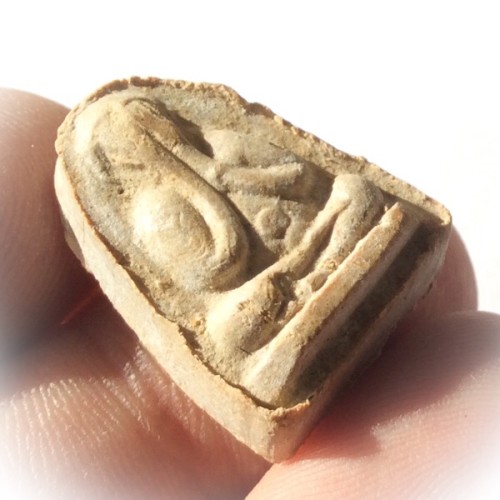 The reason for this, is that News has now got out around the Nation, that these amulets were empowered and blessed by the Great Luang Phu Tim, and Luang Phu To, with Muan Sarn Sacred Powders from Luang Phu Tim being added to the sacred clay amulets. These amulets, have the obvious presence of Pong Prai Kumarn, and other famous Muan Sarn Sacred Powders, known to come from the hand of Luang Phu Tim. This edition is now slowly taking on immense preference and popularity, even faster than the Wat Pai Lom amulets. This is due to the fact that since Luang Phu Tim’s first generation amulets became depleted, and only available to Millionaires, this subsequently, has caused the second tier of more commonly known amulets blessed by Luang Phu Tim, such as the Wat Pai Lom edition, to also suffer rapid depletion, and disappearance of the edition from the marketplace. The Wat Sri Palotay edition was not recognised until 2011, and hence has till now escaped the speculators and collectors and evaded their hands, allowing these amulets to still be avaialable whilst they are still not featured in the Nationwide News.

This will however happen, and it is only a matter of time before this series of amulets blessed, empowered and with Muan Sarn Sacred Powders from Luang Phu Tim and Luang Phu To, is also only to be found in collector catalogies, competitions, and the showcases of millionaires. Blessed in 2516 BE, at Wat Sri Palotay in Chonburi, with the great Luang Phu Tim and Luang Phu To presiding over the Buddha Abhiseka Blessing Ceremony. The amulets were distributed to local Devotees, but were mostly hidden for later unearthing and distribution. Various different models were released in this edition including various Pra Pid Ta, Pra Somdej, Pra Pud, and other amulets. Some mode,s, such as the Pid Ta, were made in different versions or sizes.

The edition is highly recommended to colkect before they become yet another rarity that is eyond the affordable reach of the general devotee, and can be considered a definite future classic of World Famous Status. The edition is however already being snapped up by collectors and devotees in Thailand, where news of Luang Phu Tim’s empowerment of the edition has already begun to become widespread, and is causing fervor in the collector communities. This edition is considered to be slowly taking over status from what is currently the most famous remaining edition of Luang Phu Tim’s pantheon of amulets, the Wat Pai Lom series edition, which is also now the top sought after series blessed by Luang Phu Tim. We highly recommend both editions as a wise choice of Sacred Amulets, that have a Grand Future and Highly Ascending Trajectory ahead of them.