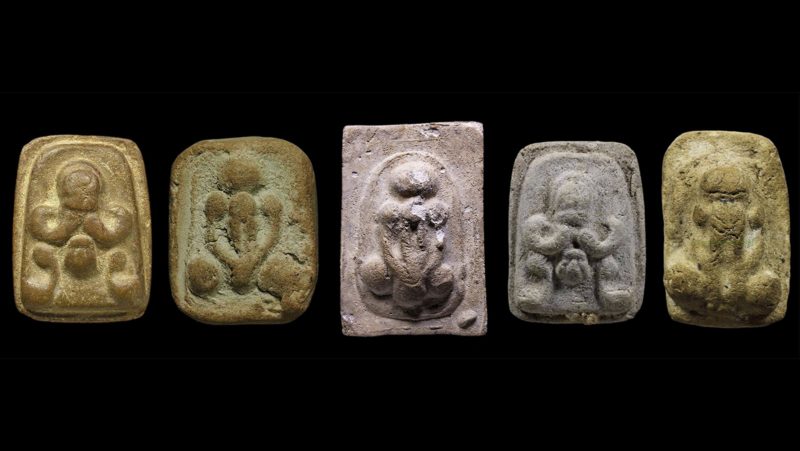 The legendary Pra Pong Athi (Graduk Phii) amulet of Pra Ajarn Hnoo Wat Po Ta Dtian became famous during the second world wartime as a powerful protector against deadly dangers, and has remained famous to this day. It was during the second world war and Indo-Chiina wartime era that many powerful sorceror monks in Thailand began to come out and create amulets to distribute to soldiers and the common folk, to protect them against the deadly dangers of wartime. In that time, the Japanese were occupying Thailand as ‘forced allies’, and so Thailand was being bombed by the allied nations, who were attacking the Japanese military installations. Very often bombs would miss the Japanese target, and hit a local village instead,n and innocent Thai people were killed. And so it was in this era than we came to see amulets like the Pra Pid Ta Pong Graduk Phii come into existence.

Pra Ajarn Hnoo was a Master Gaeji Ajarn who was known for his intensive practice and mastery of Vipassana Kammathana, and Khmer Sorcery. he would not socialise with other monks, and only his most fearless and devote initiates would dare to enter his Kuti Hut, for it was known that he would ‘Liang Phii’ (take care of Ghosts in his hut).  In the year 2485 BE, Pra Ajarn Hnoo, of Wat Po Ta Dtian (or, ‘Wat Pra Chetupon Wimon Mangkalaram’), created a powerful amulet, in secret, and with his own hands, to help people survive the war and prosper in life. This amulet was to become a legend that has maintained its status into the modern era, and is even the subject of a documentary. This amulet is of course the Pra Pid Ta Nuea Pong Athi (or better known as ‘Pra Pid Ta Pong Graduk Phii’ amulet. Pra Ajarn Hnoo was a Gaeji Ajarn of Khmer Origins, who possessed powerful Necromantic Wicha. He was not very old at the time, but already had a large following of respectful Devotees, who revered him for his powerful Magic. Pra Ajarn Hnoo liked to grow magical herbs around his Kuti Hut at the temple to use for making amulets and potions, holy water and bestowing blessings. Pra Ajarn Hnoo was often visited by devotees to perform spiritual healings with his holy water and herbal potions, and people would ask him for amulets and blessings. Pra Ajarn Hnoo hence began making amulets, in a very unusual manner compared to the usual Thai Buddhist Traditional methods, bringing in his Khmer Sorcery to add to the magical power of the amulet. He used ashes from the bones of cremated corpses, mixed with Puttakun Powders and Ittijae Powders, and Pong Wan Aathan (a mixture of powdered magical herbs and pollens)

The use of the ashes of cremated bones in the amulets came from Pra Ajarn Hnoo’s Khmer Necromantic Sorcery training, which holds to the premise that the ashes or bone powders, funereal earths and corpse oils of the dead, possess immensely powerful magic.

The ashes of Phii Dtaay Hoeng were used, according to the Dtamra Saiasart Khmer Grimoires of Necromantic Sorcery, which specifies that only the ashes of a Hoeng Prai Ghost can be used if the Wicha is to be powerful. A Hoeng Prai is often known as a ‘screaming ghost’ because the word means a person who died in an accident prematurely, or through unforeseen circumstances. So often this will mean a person who died screaming. Hoeng Prai spirits are in Limbo and often angry, possessing immensely powerful psychic energy. The sorceror appeases the spirit in Limbo by agreeing to a collaborative effort, where the ghost of the spirit in Limbo agrees to use its psychic powers to aid the human who owns the amulet made from its ashes, and accumulate good Karma to achieve eventual release from Limbo. In addition, astrological Necromancy states that a Hoeng Prai Ghost must die on a Saturday and be cremated on a Tuesday, for the full formula of Lucky Fortunes Magic to come into effect.

Pra Ajarn Hnoo saw to it that he fulfilled al of these Ritual requirements, and gathered the sacred ashes until he had enough to press amulets with them, and mixed them with his other prepared Muan Sarn Sacred Powder ingredients, the Pong Puttakun, Pong Ittijae, and Wan Aathan. In addition, Pra Ajarn Hnoo then added his special ingredient, ‘Wan Pong’, or more commonly known as ‘Wan Graser’. Wan Graser is a very rare herbal plant found in the deep rainforests, and is said in Folk Legends to be a bloodsucking ‘Vampire’ plant. If an animal gets entangled in it, it is said the plant can slowly suck the blood out of the animal until it dies. This herb is a very difficult herb to cultivate, as its true habitat is in the deepest rain forests, but Pra Ajarn Hnoo had managed to cultivate some around his hut at the temple, and he used them for the making of the Pra Pid Ta Pong Graduk Phi. In any case, despite the Muan Sarn Sacred Powders used by Pra Ajarn Hnoo to make the Pra Pid Ta Pong Athi amulets seeming very scary in their natural origins, Pra Ajarn Hnoo performed appeasement rituals and purification ceremonies over all the individual ingredients of the Muan Sarn Sacred Powders before the amulets were made, and removed any black magick or negative karmic influences and energies from them beforehand, leaving only the pure unstained magical power and energy remaining, to be re-empowered with its new purpose.

The power extracted through Necromancy was then imbued within the form of the Pra Pid Ta amulets, and blessed with Buddhist Blessings of the Buddha Abhiseka (Dhamma Chakra opening of the eyes of the Buddha), empowering the extremely powerful energies within the Muan Sarn Sacred Powders to be able to bring auspicious blessings and strong protective power to keep the wearer from harm, and lead to prosperity and happiness. Many gamblers have found the Pra Pid Ta Pong Graduk Phii to be an exellent Luckbringer to turn the tables and odds in their favour, and to ‘whisper’ in the ear of the gambler to hint as to what bets should be placed. This is known as ‘Prai Grasip’ Ghost Whisperer Magick. Pra Ajarn gave a rule to gamblers however for this amuletl That ‘If your winnings are within reason, you should not push your luck too far’.